This tutorial will guide you through adding Fence collision to your map.

Fence collision is infinite vertical collision that is only collidable on one side. These are typically used as the "walls" of the map so the player can't escape its bounds.

Fence Collision is represented in SketchUp as a series of lines in a group with a Fence group tag applied to it.

Since fences are one-way collision, which side is solid is determined by how you draw the lines and which tag you use on the group:

For this map, you can simply draw a square around the edges. If you draw the lines in such a way that they create a face, be sure to delete that face. Once you're done, group the lines together. Make sure to go in the same direction with all of the lines!

To start, you'll want to focus the Terra group that your roads are in and draw 4 lines going around the bounds of the map.

Assuming you drew the lines in the same direction as the demonstration above (clockwise), you will want to tag use the FenceCCW group tag to make them face inwards towards the playable area. 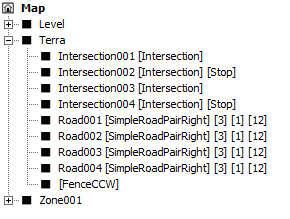 There's no new rules to add for the fences (they're handled by the BaseZone ModelOutputInstructions) so you're actually already done!

If you've done everything right, the map should successfully build and your fences should work ingame:

NOTE: This demonstration uses the Debug Text hack included with the Mod Launcher to visualise the fences.

If the collision is backwards from what you'd expect, try swapping out the FenceCCW tag for FenceCW to flip it around.