This part of the launcher sees a significant change in this update.

Introducing Pages! This divides mods and hacks into the "General", "Setting" and "Developer" tabs. 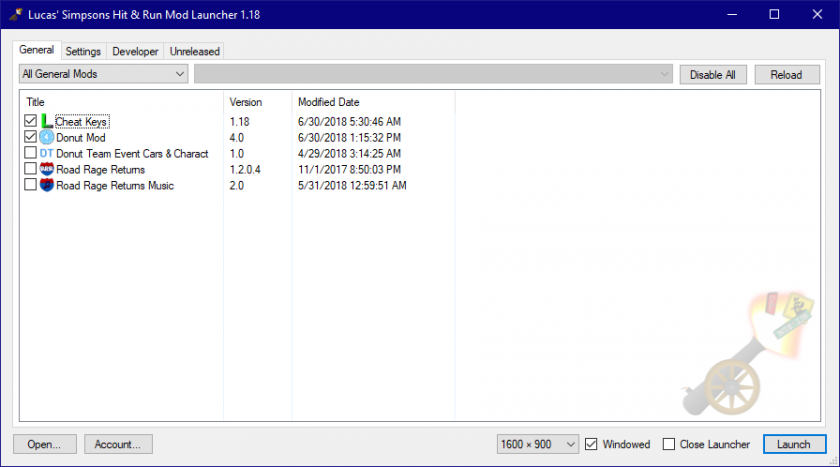 There's also an "Unreleased" tab which only shows up if there are mods marked as such loaded.

If you're not a fan of this change, you can disable it by right-clicking the mods list and unticking "Pages" to use the old mods list.

Other changes in this version:

Launcher settings got a complete redesign in this version.

There were also the following additions and changes:

The following hacks were moved to the new Settings page:

The following mods were moved to the new Settings page:

The following hacks were moved to the new Developer page:

The following new hacks were added to the Settings page:

Added this new hack. This hack adds support for 3D Car Previews in the Phone Booth (similar to those found in Car Shops).

Added this new hack. This allows you to control some audio related features of the game such as starting ambiance for story missions.

Added this new advanced hack that allows other hacks to add support for custom audio formats.

Added the PreviewScale property. This allows you to set a custom scale for the car when it's in a car shop.

Removed this hack. It is now a LegacyResource of the new Custom Shop Support hack.

Added a third argument to the DirectoryGetEntries function called "EndToStart" which returns the list of files and folders in reverse order.

Added this new hack. This hack allows you to specify custom NPCs for car shops and allows you to blacklist or whitelist sars and skins at specific phone booths and skin shops respectively.

Added "Default Resolution". This allows you to configure the default resolution of the game window before the game loads your settings.

Added "No Destroyed Car Jump Out".

Added this page with information on a few different heaps.

Added this page with various information about the currently loaded RMS files.

Made this page also show the current and loaded interior.

Added this page that draws road segments in the world with names.

Made this page list triggers the player is in and show triggers as boxes with names in the world.

Made non-english versions of the game use 200,000hz as the maximum sample rate like the Release English version instead of 100,000hz.